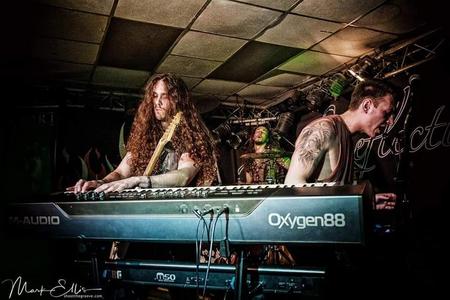 Classic Rock
Blackpool's A'priori have an unusual guitar/drums/keyboard configuration, but the
lack of bass guitar doesn't stop them from letting loose the kind of riff that Royal
Blood or Muse would donate a kidney to compose. Some lovely, fluid soloing from
axeman Tony Lang, who also does the singing, which soars in a Myles Kennedy/Axl
Rose fashion. Impressive, impassioned, professional stuff.

Rockzone UK
A'priori delivered their own unique modern twist on classic, hard rock/metal (I mean, who
knew what a great sound could be made without a bassist?). Catch the band as
soon as you get a chance folks.

Ever Metal
A'priori brings a guitar driven sound with a classic edge to their modern rock style.
Despite an industry that has diluted rock music to the point where one can’t even
be sure there’s such a thing as straight rock ‘n roll anymore, A'priori give the pure
rock fans what they need and desire. With exhilarating guitar solos, raspy vocals, the
strength of the drums and keyboards that reinforce the sound with such precision
and depth, the lack of a bass guitar is unnoticeable and refreshing. A'priori will leave
you begging for more!

View on Mobile
A'priori give the pure rock fans what they need and desire. With exhilarating guitar solos, raspy, powerful vocals, beautifully harmonised bass and the pounding heartbeats of the drums, A'priori will leave you begging for more!